Dance of the Plants 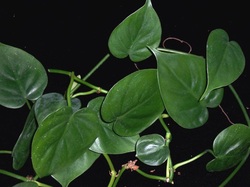 A researcher named Dorothy Retallack did some pioneering studies into the effects of different kinds of music on plants. Using strictly controlled conditions, she kept her plants in large closed cabinets where light, temperature and air were automatically regulated. She found that in under four weeks, three hours a day of acid rock, playing through a speaker in the side of the cabinet was found to stunt the growth of and damage philodendrons, squash, and corn plants.

A third experiment was conducted with some fascinating results. Retallack used groups of beans, squash, corn, morning glory and coleus plants. These plants were divided up into groups that had the music of Led Zeppelin and Vanilla Fudge played to them; another group had contemporary avant-garde atonal music played to it; another group was kept in silence and an additional group had peaceful devotional music played to it.

Retallack found that after ten days, the group exposed to Led Zeppelin and Vanilla Fudge (hard rock music for those not aware of these musical groups) were all leaning away from the speaker and after three weeks these plants were all stunted and dying. The plants exposed to the avant-garde atonal music were leaning 15 degrees away from the speaker but they had medium sized roots. The plants left in silence had the longest roots of these three groups and grew the highest. However, the last group that had the devotional music played to it produced plants that not only grew two inches taller than the plants left in silence, but they grew toward the speaker! I think nature was making a statement here.

Some other fascinating research was done by Dr. T. C. Singh, the head of the Department of Botany at Anamalia University in India. Dr. Singh discovered that classical music caused plants to grow twice as fast as plants not exposed to classical music. He then went a step further and found that a music instrument creating sound waves will cause the protoplasm of cells (the fluid medium inside all cells - plant, animal, human) to increase its motion. Dr. Singh found that violins produced the most movement of the protoplasm.

Another discovery of Dr. Singh has far-reaching implications. When he tracked the plants that showed vigorous growth in response to the music, he found that later generations of their seeds produced plants that also showed increased growth. Think of the implications! This means that the music somehow altered the chromosomes of the plants! What could this mean for music that is harmful for the plant - or for our bodies?